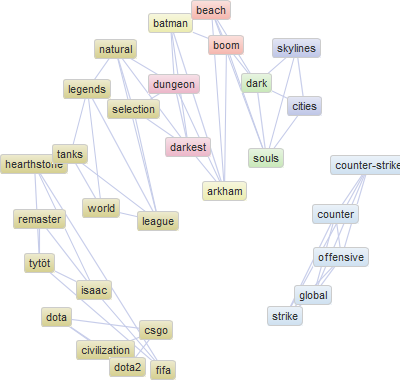 Figure: Games that were associated with each other in the survey results

The previous two articles on Gamifying CSCL and Building Fair CS:GO Teams are an excellent segue to today’s topic. A year back we made an survey on how motivated video game players would be to exercise for in-game rewards. Additionally we performed a systematic mapping study on current scientific literature handling the topic. We found that it has not been a much researched subject and the attitudes of players were open to connecting video games and exercise by gamification.

According to our survey casual videogame players were willing to do physical exercise for in-game rewards. (with the survey mostly concerning Counterstrike players)

To gain an understanding on how players would feel about connecting physical activities with video games, we carried out a questionnaire to possible end users. The questionnaire was targeted to Counter Strike players and the responses showed that there is an audience for using in-game rewards to motivate users to exercise, especially among the segment that does not currently exercise a lot. The questionnaire received 47 answers from 44 males and 3 females. Majority (60%) of respondents were between 19-30 years old, 31% were between 10-18 and 9% were 31-50 years old. Most respondents (42%) told that they play more than 3 hours/day, 30% play 2-3 hours/day and 27% said that they play less than 2 hours per day.

More details in the actual paper! Link below.

Available in the ACM Digital Library and preprint in ResearchGate.

This study presents a concept for linking individual physical activities and video games together to build an ecosystem to motivate players to exercise. We used a systematic mapping study to establish current state of art and a user questionnaire to understand how players feel about digital rewards from physical exercises. In addition we implemented a prototype to demonstrate the applicability. The results suggest that combining games and physical activity trackers together is technologically feasible, and there is an audience who would be willing to exercise in order to receive rewards in games.