Why Do People Use Wearables? A View from Universities 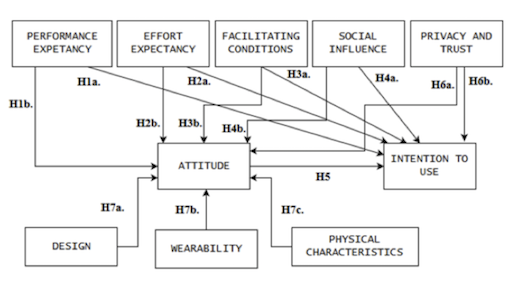 Wearable devices are in the first big peak of the hype cycle. In the article “Intended use of smartwatches and pedometers in the university environment: an empirical analysis” my collague Jayden and the rest of the team investigate what motivates people to use them. We used his prototype wearable acceptance model (WAM) and partial-least squares path modeling to find causalities in people’s views and their intention to use wearables.

In this initial study we found that the following factors affect people’s decision to use wearables:

Additionally, there was an interesting non-affecting factor: Effort Expectancy. Users’ beliefs about the ease of use did not have an impact on their intention to use.

In this work, we empirically examine factors that influence the intention to use wearables e.g. smartwatch or pedometer, in the university environment through a Wearable Acceptance Model (WAM). WAM incorporates UTAUT model and additional variables like wearable characteristics (e.g. wearability, design and physical characteristics), attitude and privacy. WAM was used with an online survey of 129 university faculty, staff and students. Further, partial least square (PLS) path modeling was applied in analysis of 14 hypotheses to validate WAM results. In accordance to WAM, wearability and attitude tend to have a direct effect on intention to use, whereas performance and effort expectancy had only a direct influence on attitude and no direct influence on usage intention. Similarly, privacy concern, social influence had a positive influence on the intention to use both directly and indirectly through attitude. However, design and physical characteristics had no effect on intention to use. This study makes a unique empirical contribution to wearable research by extending knowledge on university users’ behavior regarding wearables for well-being.

Jayden Khakurel, Antti Knutas, Mika Immonen, and Jari Porras. 2017. Intended use of smartwatches and pedometers in the university environment: an empirical analysis. In Proceedings of the 2017 ACM International Joint Conference on Pervasive and Ubiquitous Computing and Proceedings of the 2017 ACM International Symposium on Wearable Computers (UbiComp ‘17). ACM, New York, NY, USA, 97-100. DOI: 10.1145/3123024.3123147